Blog - Latest News
You are here: Home1 / News2 / “Architetta” for the feminine: why Devoto Design supports ...

“Architetta” or “Architetto”? Here’s why it is grammatically and culturally correct to decline the feminine noun when it comes to job roles and why it is important to use it in official communications, stamps, signatures and business cards.

Some days ago, several Italian newspapers reported that the Architects Association of the city of Cagliari (Sardinia) had approved the term “Architetta” upon the request of an architect to use it for her stamp. A small gesture, yes, but a meaningful one as well that will help people move past job stereotypes.

“Devoto Design is an “Architetta”. This is such a commonly used term in our company that we actually don’t pay attention to its use anymore. Specifically, our management is made of women; in fact the Sales director, Export director, Accounting director. Purchase & Logistics director are women. As well as half the company’s project managers”.

The Architects Association of Bergamo already approved and adopted gender equality for job roles in 2017. Architect Silvia Vitali, who made the request, wanted to put an end to a sexist matter. From that day on, other Italian associations approved all the requests that came from other professional women to use the word “Architetta” instead of Architetto.

IS IT REALLY NECESSARY TO ASK FOR APPROVAL?

What we mean is: can’t the professional stamp be automatically accorded to the gender without asking to change it in a second moment? While waiting for this to happen and become a habit, let us clarify some objections that have arisen about the declension of the word Architetto in the feminine form Architetta. Let’s start from a mere linguist point of view..

IS IT CORRECT TO SAY “ARCHITETTA”? YES.

The Italian language declines nouns and adjectives in feminine and masculine forms. However there is no rule that determines why some nouns are masculine and some are feminine (e.g. Table = “tavolo”, masculine; chair = “sedia”, feminine). Most of masculine nouns and adjectives end in –o, while most of feminine ones end in –a. This distinction doesn’t make Italian a sexist language, of course. So even though some words were born masculine because linked to professions that in the past were only done by men, the Italian language has rules that can decline these words in feminine too.

THE ITALIAN LANGUAGE CAN DECLINE NOUNS

Back in 2013 Accademia della Crusca (the most important Italian research institution on the Italian language) had already confirmed the possibility of declining nouns in the feminine gender for what concerned institutional roles and professions. It is the case of the term “Ministra”, feminine declension of “Ministro” (Minister). If we think about it, the list of professions in Italian is full of masculine-feminine declensions: “maestra”/”maestro” (teacher), “infermiera”/”infermiere” (nurse), “sarta”/”sarto” (tailor) among the others. The term “Architetta”, though, is new because the access to this profession by women is also relatively recent.

The first Italian woman architect is Elena Luzzato, who got her degree in 1925.

“Languages are not static entities, and neither are societies..the secret, then, is to accept changes.”

A frequently raised objection is that the term Architetta is cacophonic, which means that the word doesn’t sound too good. Again, this issue is linked to culture and habits only and not to the language itself, since we commonly use both “Professoressa” and “Professore”, just to give an example.

IS USING THE TERM “ARCHITETTA” SEXIST?

Another objection is that the use of feminine has little if no efficiency and utility at all. Some women architects are so used to being called by the masculine term Architetto that they tend to find more authority in it – again, the result of a habit.

Moreover, some people think there is a side effect in the use of the feminine: using it is even more sexist that the use of the all-embracing word “Architetto”. “Architetta” could backfire and cause more sex discrimination than ever.

Devoto Design has always supported the use of feminine for job roles. That’s why we encourage our colleagues to keep asking their associations to release stamps with the feminine declension and to alert newspapers when this request is done.

FUN FACT: while drafting this article the author has tried different writing software. All of them, once selected Italian as main language, underlined the word Architetta as an error.

All words are the result of history and stratification of meanings but languages are, at the same time, “alive” and changeable. When used every day in common lexis, a new word can gain new shades of meaning, therefore:

All quotes in this article are by Marianna Devoto, Devoto Design’s sales director and “Architetta”. 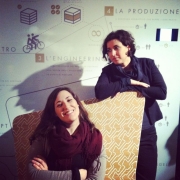 Devoto Design 2022: The words we’ll take with us into the upcoming year
0 replies

Qatar Museum Gift Shops Construction: Find Out How We Made It Possible!