Blog - Latest News
You are here: Home1 / News2 / Rome Convention Center Outfitting: Back to the “Nuvola”

Rome Convention Center outfitting: five years after its official opening, Devoto goes back to one of the most iconic buildings in the city to deliver some new works. The centre was designed by starchitect Fuksas and named “Best Building Site” by the Royal Institute of British Architects in 2012. Here we’ll share some details and little secrets behind the project.

To host the forum of the Group of Twenty (G20), the Rome convention centre has decided to expanded its spaces by having Devoto Design create create a bar/bookshop and a workshop/café. These open spaces have the dual function of being meeting points and, at the same time, refreshment areas for visitors to the Centre. The new spaces were designed by the same Fuksas studio that designed the Convention Center about twenty years ago, Devoto Design, and the Construction Management of Eur Spa.

If you want to know some details about the contruction techniques of the centre but also some fun facts behind it, keep reading.. 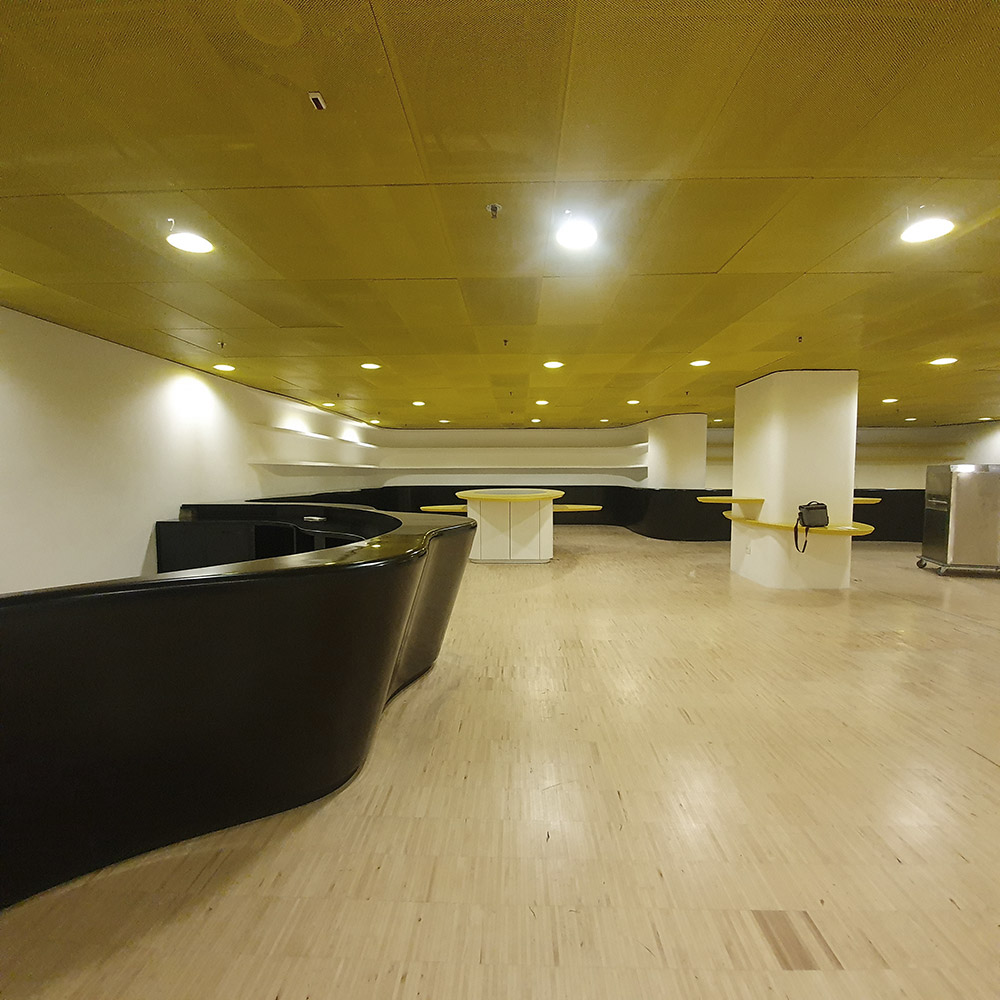 The bookshop bar is a 320sqm space characterized by the presence of a black “ribbon” in double curvature that winds along the entire length of the walls transforming itself first into a reception seat, then into a coffee counter and, subsequently, back into a counter, wrapping the space in a sinuous way and giving material and organic continuity to the space.

In this environment there are also “islands” of different sizes from the complex shape that have a display function for the bookshop gadgets and can also be used as service plans for browsing books.

The workshop/café is a long and narrow place where we can find our big elleptical counter characterized by an organic shape and curves.

Both counters, the bookshop one and the workshop one, in order to obtain organic shapes in double curvature and a surface with excellent mechanical resistance to wear, we opted for the implementation of an internal structure made of wood layers, a layer of fiberglass and an external finish in color fireproof Gelcoat.

As for the chromatic choices of this project, we have a strong contrast between the black “ribbon” and the yellow walls of the bookshop, that gives this place a strong personality.

So for this new project Devoto Design delivered:

Going back a few years, for the same Convention centre, in 2016, Devoto Design was responsible for completing the interior and exterior cladding of “The Cloud” Auditorium and all the glass balustrades inside the building.

For the project of the auditorium, Devoto offered the following services:

To obtain such a complex double-curving stucture we opted for a parametric approach. Both claddings are made of thousands of panels with different shapes and dimensions. It was possible to produce and install them thanks to a software we customized and developed: by inserting the survey data, we were able to divide the surface into panels and cathegorize them according to the different typologies. To make it harder was the fact that most of the panels have a double curvature shape.

Are you wondering how it was possible to “curve” the panels? Well… for most of them “simply” by making back incisions that allowed the panel to flex and anchor to the substructure, which was also engineered and made entirely by our team. This insight allowed us to stay on budget and on schedule while still meeting design requirements.

HOW WE FIXED THE CLADDING OF “LA NUVOLA”

In order to identify and “mark” the anchoring points of the substructure on the immense pre-existing vault surface, the project required the intervention of a very special professional: a Paintball player.

For those who don’t know Paintball: it’s a game where you have to conquer the other team’s base and eliminate the opponents by hitting them with paintballs. These balls are shot with proper tools called markers. Because of the impact speed, the ball pops when hitting the opponent and releases paint on the player’s clothes or marker. When the player is marked, he is eliminated. According to the laws and regulations, the balls are biodegradable, non-toxic and eco-friendly (source: Wikipedia).

Thanks to the aim of our professional player, therefore, balls of red paint were “shot”. This was done after taking the necessary measurements with high-level laser instruments and identifying the anchor points. The same red paint was used to mark the fixing points on the walls, even tough in this case we simply used a spray can..

Happy birthday to Paolo Portoghesi: the Architect of the “Poetry of the...