Blog - Latest News
You are here: Home1 / News2 / Happy birthday to Paolo Portoghesi: the Architect of the “Poetry...

Today we wish happy birthday to the Professor and well-known architect Paolo Portoghesi who turns 90. On the occasion of this pleasant anniversary, we are pleased to tell you how meeting him contributed to Devoto’s evolution from an artisan workshop to an international company…

WHEN I HAD AN APPOINTMENT with architect Portoghesi at the University to talk about our projects, I tried to arrive early to have the honor of attending some of his lectures. I remember one in particular… on Art Nouveau. I still remember the passion with which he described the slides he showed his students (Claudio Devoto). 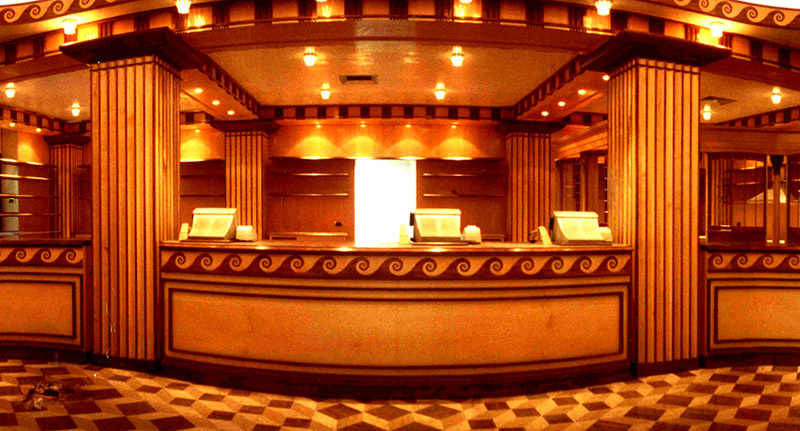 …and the company Devoto Arredamenti srl, led by the couple Claudio and Caterina Devoto, was already expanding.

We started out as a small workshop where we made furniture, bookcases and home decor items for friends and family.

The passion and desire to create was great and with a staff of 32 carpenters and a factory of 1500 square meters, the company aimed to specialize in the construction of bars, stores and hotels. It was during this period of strong growth that a company working with Devoto decided to put us in touch with the architect Paolo Portoghesi for the project of the Great Mosque of Rome.

Professor Portoghesi was, even at that time, an established architect, academic and essayist, as well as architectural theorist and exponent of the current of Postmodernism. And he had already created important and appreciated works both in Italy and abroad, receiving numerous awards. 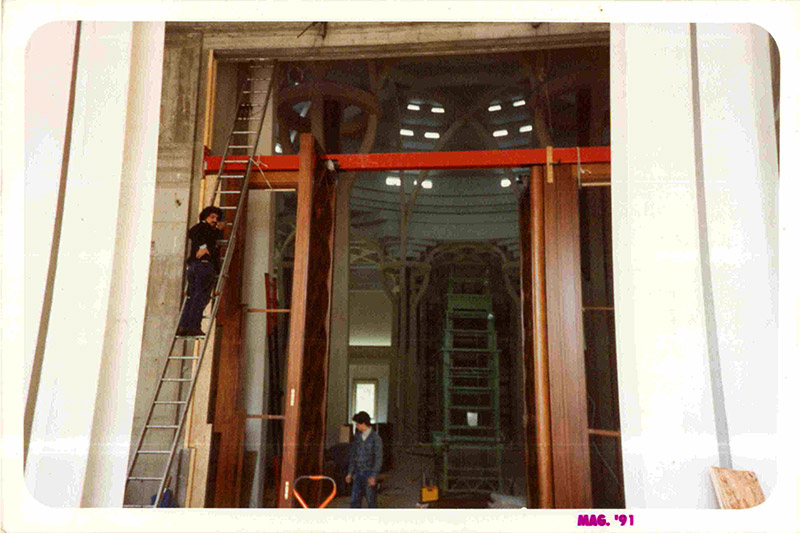 DEVOTO, architect Portoghesi told us, it’s not like I can come in person every time and bring you the drawings by hand, why don’t you buy a fax machine?

From the very first meetings, the architect Portoghesi has been a true mentor for our company, accompanying us on a path of growth that would have never stopped. And you could say that it all started with the purchase of a fax machine. 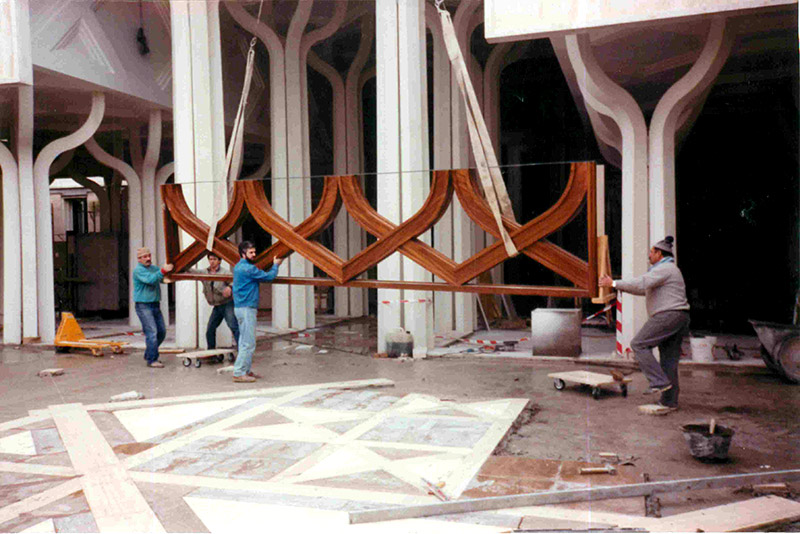 The first challenge: the Great Mosque of Rome

The project for the Islamic Center, which involved the construction of the religious building known as the “Great Mosque of Rome”, began in 1974 and was completed over the next 20 years with the inauguration of the building in 1995.  For this impressive work Devoto created:

PORTOGHESI is an extremely cultured and refined man. Together we chose wood, finishes and construction details for the mosque’s library. The commissioners wanted Arabic wood of Arab origin, so, under his suggestion, we opted for palm wood….

The “carpentry” of the architect Portoghesi

After the great appreciation received with the works carried out in the Mosque of Rome, Devoto becomes, to all intents and purposes and with great pride, the “carpentery” of the Architect Portoghesi. Together with the Roman architect Devoto completes heterogeneous projects:

Over the years, the relationship of trust and friendship between Devoto and the architect Portoghesi has grown stronger and stronger. So much so that the well-known academic and architectural theorist commissioned Devoto to furnish part of his private house in Rome and the whole residence in Calcata, characterized by cypress wood furniture both for the interiors and for the wooden structures of the garden.

The relationship of mutual esteem and trust with the architect has continued, even from a distance, over the years and, just recently, Devoto was contacted again to carry out a maintenance operation at the Calcata residence of the well-known academic.

“I GOT EXCITED!  – Claudio Devoto told us – Also because the house still smelled of the cypress with which we had made the furniture 30 years ago…. To see those same pieces of furniture that have stood up well to the ravages of time was very satisfying.”

Paolo Portoghesi: “An exceptional master” also to be read

During his long and prolific academic career, Portoghesi has written and published numerous works that are still studied at an international level. We take the opportunity to suggest one, particularly significant for us:

“The poetry of the curve” – Gangemi Editore

A book that collects a research that has spanned more than sixty years, in which the architect examines with immense depth the concept of the “curve” from the architectural point of view and architecture as a language “capable of expressing emotions, hopes, choices and rejections”.

Visit the page of the publisher Gangemi > where you can also purchase the book.

Happy birthday to architect Portoghesi for his splendid 90 years!

From Claudio Devoto and all of Devoto Design.

“I am immensely grateful to the architect Portoghesi for introducing and accompanying me in the search for the complexities and mysteries of architecture with grace, elegance, delicacy and patience. I owe him so much.” (Claudio Devoto)

Devoto architects: who are they and what is their role in a company like th...

@Devoto Design Rome Convention Center Outfitting: Back to the “Nuvola”
Scroll to top