Blog - Latest News
You are here: Home1 / News2 / How to bend wood with steam? A case study by Devoto Design

How is it possible to bend wood with steam? We’ll tell you how we did in this short article about an interesting project in Paris, at the Museée du Quai Branly. A project where parametric design meets craftsmanship..

A mix of Solid surface and solid oak wood…

For the project developed by the renowned Ateliers Jean Nouvel for the Musée du Quai Branly of Paris in 2013, our Research&Development department had to face another exciting challenge: to create a double-curving bench in solid wood and Solid Surface in the museum foyer that could work as a separating element of the space, helping visitors follow the right path and – of course – offering them a place to sit and rest.

LET’S TALK ABOUT WOOD BENDING TECHNIQUES. Let’s talk about know-how.. To stick to the project geometry, we used the “usual” wood-slicing technique, cutting the structural core of the bench in overlapping layers that could reproduce the requested organic shape. Then we used the ancient technique of steam to obtain the slats that clad the bench. (Marianna Devoto, Architect & Sales Director) 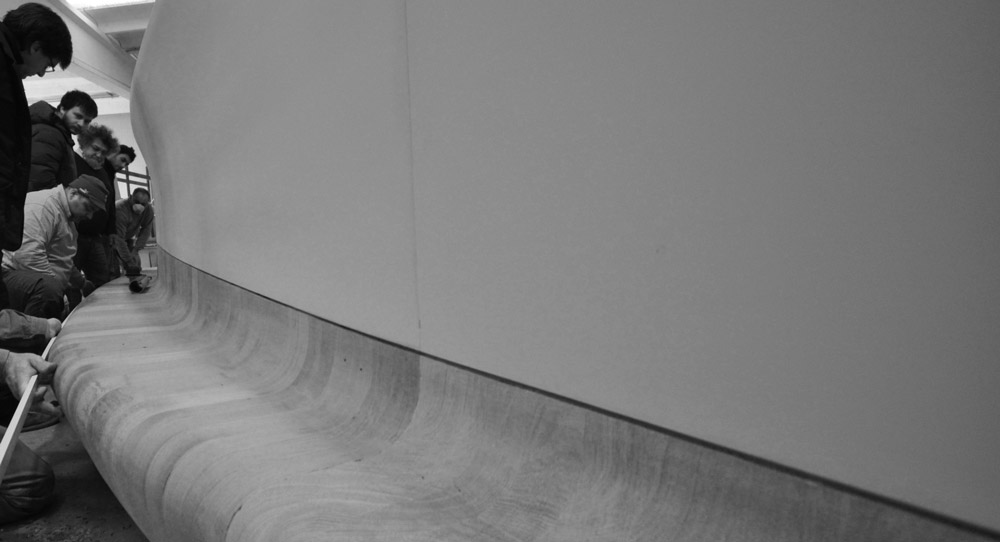 The project matched a large, white, and consistent surface in Corian® with a solid wood element made of vertical slats. Together they create a bench that complies with the existing balustrade curve and sticks out of it to create a curving seating element in the foyer of the museum.

The making of the Corian® surface was definitely the “plainest” part of the project, despite its variable curves and the delicate thermoforming tecnique necessary to make it.

Here are the manufacturing steps:

THE GOAL WAS THAT of  making the solid wood seat stick out of the Corian® surface and giving the whole element an organic, sinuous, and curving shape  (Marianna Devoto, Architect & Sales Director) 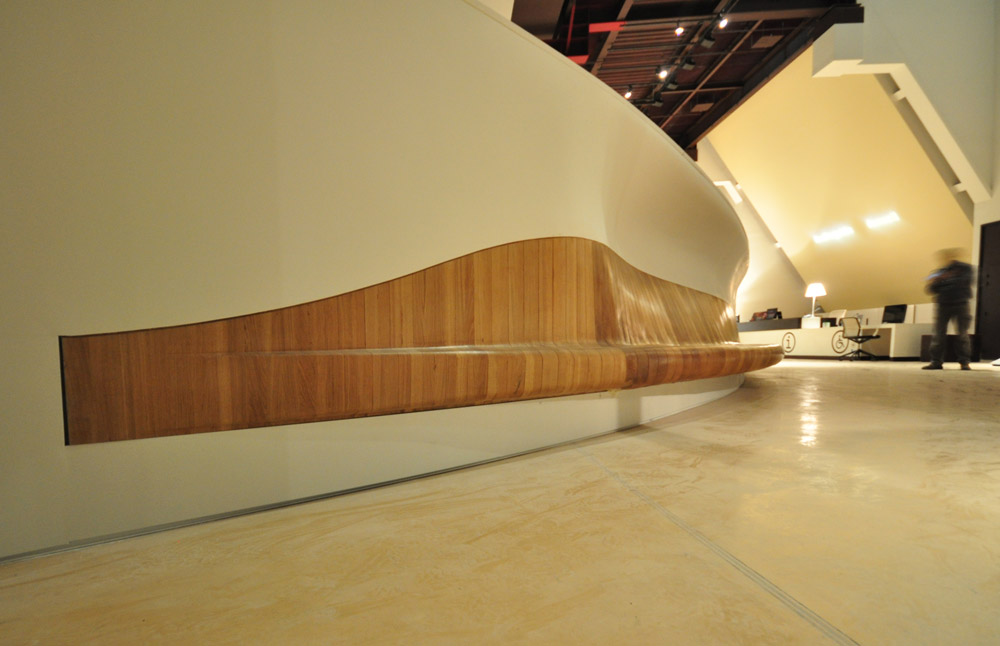 The design requisites established by the architect for what concerned the type of wood and its employement were clear:

As it is possible to see in the 3D rendering, we have a visible vertical pattern that cuts the wooden portion of the bench into vertically continuous slats. And these elements – because of the irregular shape of the bench- all had different curvature degrees.

Our first proposal was that of creating an horizontal element to be veneered and thermo-shaped to reproduce the design pattern. This proposition was refused. For Ateliers Jean Nouvel the use of solid wood had always been a conditio sine qua non.

If at first these instructions sound quite simple, to make the best out of it our team had to come up with a clever idea. First of all, the bench was “cut” into 100 wood slats, and none of them is the same.

UNIQUE PIECES: every single wood slat is different from the other. 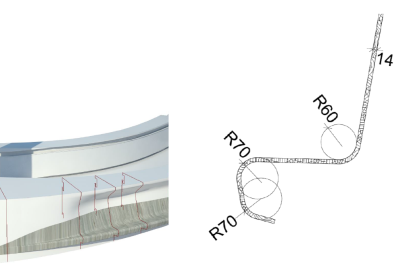 And then it was time to answer the most complicated question of all:

HOW CAN WE BEND solid wood?

The only technique that could have granted the desired result was that of steam, a process that grants the manufacture of different shapes and curvature degrees.

Every single wood slat was steam-bent and installed onto the pre-assembled substructure block. It is this substructure that gives the bench its shape.

THE TECHNIQUE TO BUILD THE SUBSTRUCTURE  was the same we used for the Zaha Hadid’s archive desk for the MAXXI Museum of Rome. We obtained a structural core that we eventually covered with thermoformed solid surface on its top part, perfectly matching the lines and curves of  the substructure. 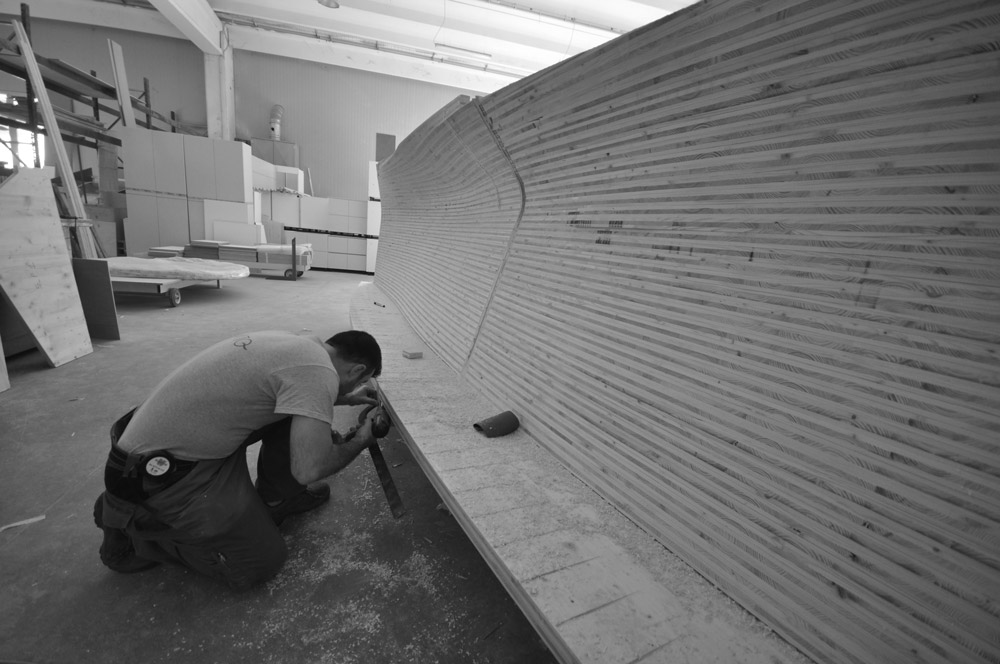 How to bend wood with steam

You know that wood is not clay, it is not an easily malleable material. We can bend it thanks to specific machines or through the use of steam. Water vapour mosturizes the fibres of the wood and triggers an expansion process.

Once expanded, we just need to “force” the wooden element into the desired shape. At the end of the process, it is enough to let it dry in the mould that we have previously and specifically created.

If you are wondering why we are talking about money saving, well this has to do with the absence of scrap wood.

WHAT IS SCRAP WOOD?  By that we mean the leftovers we get after working and processing the wood, the parts of panels that are not used for the production of the furniture and therefore discarded.

And now let’s go back to our bench: once ready, how can we take it to Paris? 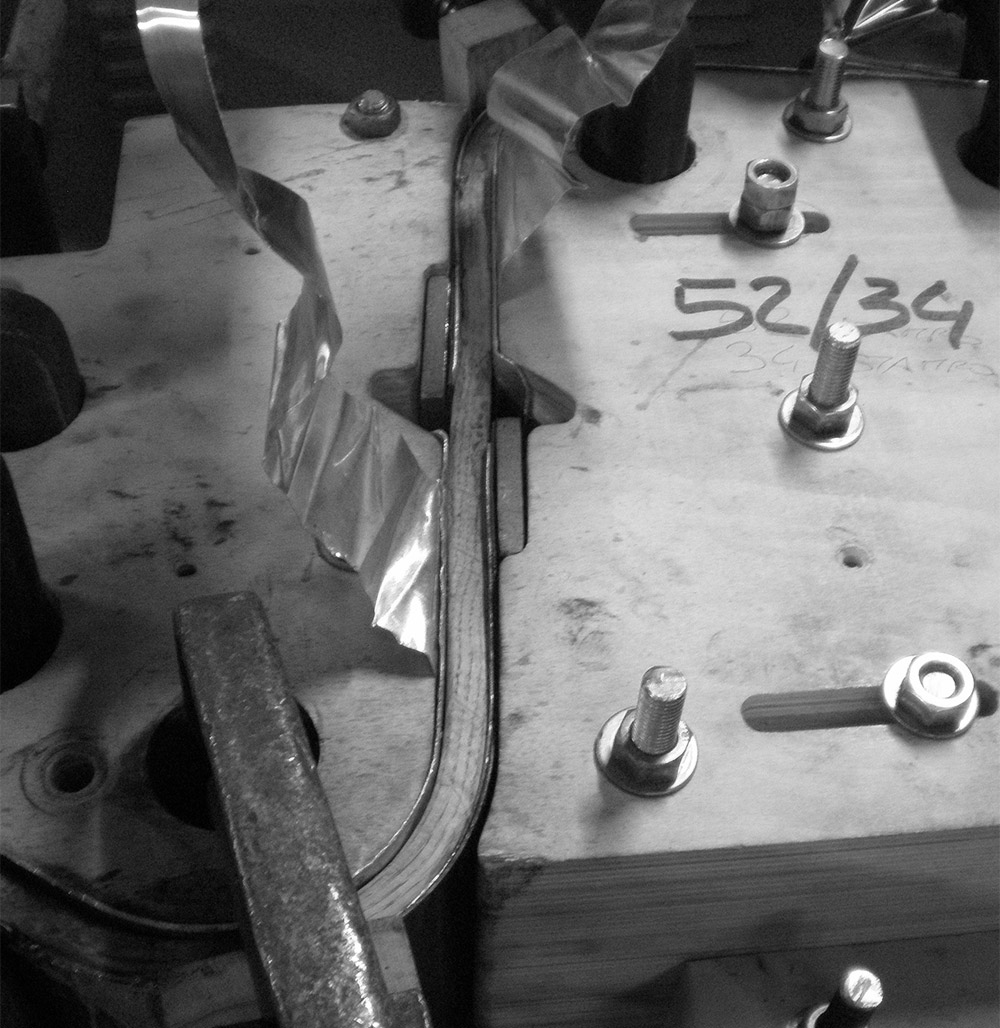 Transport and installation of the 100 bent slats

We decided to divide the whole bench into three portions. Once they reached the Musée du Quai Branly in Paris, the three parts were assembled, or better “joined”. The installation took place during the night because the museum was open to the public during the day. 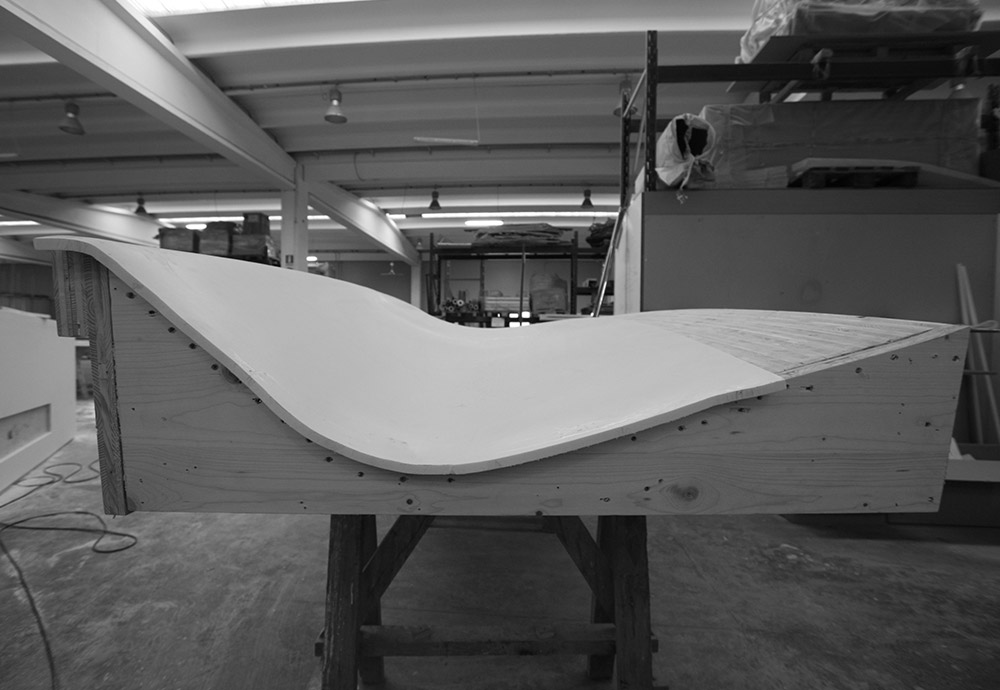 To know more about the Zaha Hadid archive desk mentioned in this article, it is possible to visit the dedicated page:

Devoto Design Interior Contractor: when it pays to have a single point of c...